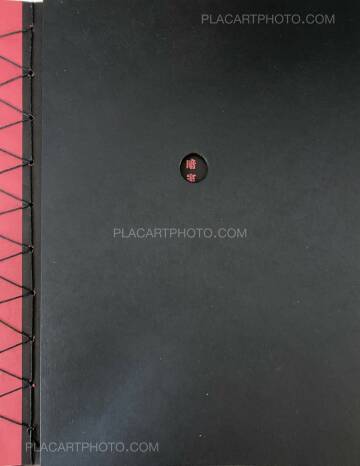 Comments: Sewn softcover, 26 x 20,5 cm.Text in English and Japanese combined. All 108 copies of the cuts used in Table 3 have different patterns. The concept, storyline and art direction of this book was developed in collaboration with Yumi Goto, Reminders Photography Stronghold. Signed by Kenta Nomura

While continuing to document the 108-year-old Yoshida Dormitory of Kyoto University, the oldest existing student dormitory in Japan, Nomura discovered an old darkroom that still exists in the dormitory. By developing the photographs Nomura had recorded on the photographic paper left in the darkroom, he attempted to burn the time and memories that had accumulated in the Yoshida Dormitory. In this exhibition, original prints produced in the old darkroom will be unveiled.

It was the spring of 2019 when I first opened the door to the darkroom in the Yoshida dormitory. This darkroom had been unattended for more than 30 years, dusty and like a junkyard. In fact, it had been more than ten years since I started taking pictures of Yoshida Dormitory, but even though I knew of the existence of the darkroom, I had never bothered to open the door.

This was because it was located in a particularly dark place at the end of a long corridor, and the darkness that peeked through the door was secretive and eerie.

The time suddenly came. I pushed open the hard door of the darkroom. In the dimness, a ray of light leaked through a torn blackout curtain, and dust danced quietly. The air was tranquil but heavy, as if it had been vacuum-packed for a long time. The clutter had been abandoned at a certain point in time. And among the rubble-like oversized garbage, I found photographic paper from that time, covered with dust and mold.

What if I could burn new photos of Yoshida Dormitory onto the old photographic paper that had absorbed so much time? With this idea in mind, I restored the old darkroom, which had been neglected for a long time, so that it could once again be used as a darkroom.

In this special darkroom, I began printing.